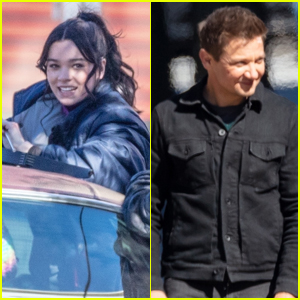 Hailee Steinfeld and Jeremy Renner are back on set of Hawkeye!

The 24-year-old actress and the 50-year-old actor spent the afternoon filming their upcoming Disney+ series on Saturday (February 20) in Atlanta, Georgia.

In between scenes, Jeremy was spotted joking around with crew members while Hailee practiced shooting her bow and arrow.

The series is based on the Marvel Comics superhero Hawkeye, centering on the adventures of Young Avenger Kate Bishop (Steinfeld), who took on the role after the original Avenger, Clint Barton (Renner).

In more new photos, it appears we are also getting our first look at a villain from Hawkeye.

Learn details about all 23 Marvel projects that were given updates during Investor Day!