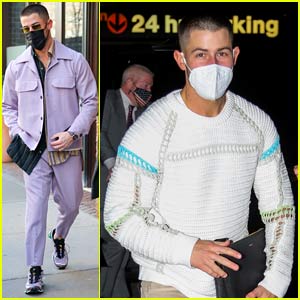 Nick Jonas is getting ready for his Saturday Night Live hosting gig and we have new content for his fans!

The 28-year-old singer was spotted wearing a purple outfit while heading to the studio on Thursday morning (February 25) in New York City.

Nick wore a white sweater the night before while heading back to his hotel after prepping for his big night.

A funny new promo video for Nick‘s Saturday Night Live gig was just released. For those that don’t know, he is going to be both the host and musical guest this weekend.

In the promo, Nick is joined by SNL cast members Ego Nwodim and Bowen Yang, who jokingly say they thought they were the musical guest and pitch their single “You Idiot.” Watch the video below!