Last week’s episode of WandaVision was the first one to include a post-credits scene and now Episode 8 also has one!

The penultimate episode of the Marvel Cinematic Universe’s first television series for Disney+ is now streaming and there’s a huge moment that you need to see after the main credits roll.

We’re going to be discussing spoilers in this post, so stop reading now if you don’t want to know what happens.

Throughout Episode 8, we finally learn why Wanda (Elizabeth Olsen) created the hex on Westview and what was going on in her life leading up to that moment. One thing in particular that we learned was that Wanda never actually stole the real body of Vision (Paul Bettany) from the S.W.O.R.D. headquarters, which means they still have him. 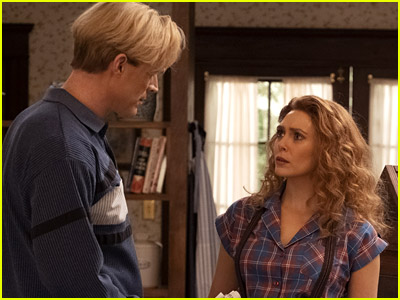 So, what happened in that end credits scene?

The post-credits scene begins at the 39:43 mark in the episode. We see S.W.O.R.D. acting director Tyler Hayward (Josh Stamberg) standing outside of the hex and an officer tells him that it’s time for launch. He then goes into a tent and stares at something with a colleague.

“We took this thing apart and put it back together again a million times. We tried every type of power supply under the sun when all we needed was a little energy directly from the source,” Hayward says while staring at the missile that had been in the hex.

A flip is switched on and we see the power from the missile goes to the body of… White Vision!

This version of Vision was introduced in the Vision Quest comics, when the character lost his color from being disassembled because of him taking over America’s nuclear arms. The new White Vision is emotionless and doesn’t have any of the personality traits that Wanda fell in love with.

See how people are reacting to White Vision below!

#WandaVision spoilers
–
–
–
–
paul bettany after telling us about the mystery actor he’s excited to work with when next week we find out that there is no actor and he was talking about himself all this time (vision vs white vision) pic.twitter.com/khFqf9tP7b

episode 9 of wandavision needs to be like 2 hours long: