The eighth episode of the Marvel series WandaVision is now airing on Disney+ and there’s a huge moment at the very end of the episode that everyone is going to be talking about.

This post is going to contain spoilers, so stop reading now if you don’t want to know what happens!

We learned in Episode 7 that Kathryn Hahn‘s character Agnes has been Agatha Harkness all along and she had Wanda (Elizabeth Olsen) trapped in her mysterious and magical basement.

At the beginning of Episode 8, we learned all about Agatha’s backstory and how she was put on trial in Salem by a coven of witches for using dark magic. Instead, she drained all of the life out of the other witches and demonstrated her immense power. 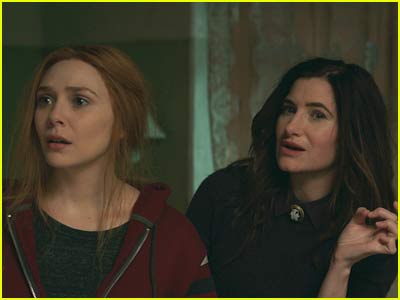 Throughout the rest of the episode, Agatha took Wanda on a journey through her life in order to learn how the hex on Westview was created. Some of the things we learned included how Wanda learned to speak English as a child through watching American sitcoms and that her parents died when a bomb hit their apartment. We also saw Wanda see herself as the Scarlet Witch (and didn’t know it!) when she came into contact with an infinity stone for the first time while being used as a test subject.

Another thing we saw was Wanda’s visit to the S.W.O.R.D. headquarters to retrieve Vision’s body, which she didn’t actually take with her. When she went back to Westview, she visited the plot of land that she and Vision bought to build a home and she used her powers to create the perfect sitcom home. She also brought Vision to life out of nothing while putting the whole town into the hex. 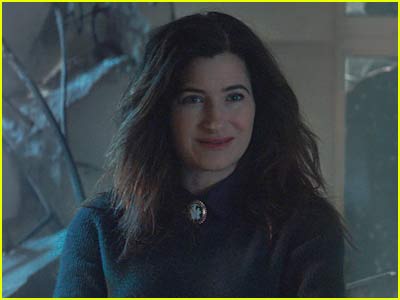 At the end of the episode, Wanda finds Agatha in the street with her two sons being held prisoner by her magical webs.

“I know what you are. You have no idea how dangerous you are. You’re supposed to be a myth. A being capable of spontaneous creation. And here you are, using it to make breakfast for dinner… this is chaos magic, Wanda. That makes you, a Scarlet Witch,” Agatha tells her.

So, why is this so important? This marks the FIRST time in the Marvel Cinematic Universe that Wanda Maximoff is actually referred to as the Scarlet Witch on screen!

Keep reading to see how fans are reacting to that major moment.