SPOILER ALERT – Do not continue reading if you don’t want to know what happened in the WandaVision finale!

A big reveal was made during the finale of WandaVision and we learned the true identity of the character being played by Evan Peters.

The 34-year-old actor was introduced in the final moments of episode 5 as Wanda Maximoff’s brother Pietro, who had died in Avengers: Age of Ultron. The MCU’s Pietro was played by Aaron Taylor-Johnson.

Evan played the role of Pietro/Quicksilver in three X-Men franchise movies and many people assumed that the Marvel Cinematic Universe was welcoming the multi-verse. A big reveal in the WandaVision finale confirmed that this is not the case.

Click inside to read some spoilers from the WandaVision finale… 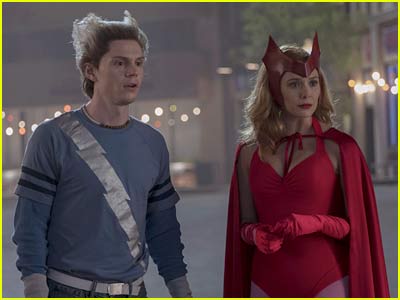 We already learned in episode 7 that Evan‘s character was cast as Fake Pietro by Agatha Harkness (Kathryn Hahn) and that he was under her spell.

During episode 9, we saw that Fake Pietro was holding Monica Rambeau (Teynoah Parris) hostage and she was the one who discovered who he truly is. She found a headshot featuring the name Ralph Bohner. This isn’t a name already associated with Marvel, so it seems it was created just for the show.

So, all along, Evan was playing a Westview resident named Ralph, who was an actor. He was placed under Agatha’s spell to play Pietro and fool Wanda into thinking her brother returned.

// #WandaVisionFinale spoiler
–
–
–
SO PIETRO IN WV IS NOT THE FOX QUICKSILVER. HE IS RALPH BOHNER- PITY FOR ALL THE X-MEN COLLAB HYPE I WAS HOPING ://

Who the FUCK is Ralph Bohner