Meghan Markle bravely opened up to Oprah Winfrey about the suicidal thoughts she was feeling while facing pressure from the media two years ago and she talked about a specific photo she saw on the day she told Prince Harry about what she was going through.

The Duchess of Sussex said she “didn’t want to be live anymore” amid the constant bullying and you can read more of her comments in our other post.

Meghan then revealed how the day she told Harry about her suicidal thoughts, they had to attend an official event. When she saw a photo from the event, which took place on January 16, 2019, she zoomed in and saw something devastating.

“One of the things that still haunts me is this photograph that someone sent me. We had to go to an official event. We had to go to this event at the Royal Albert Hall and a friend said, ‘I know you don’t look at pictures, but oh my god, you guys look so great,’ and sent it to me. I zoomed in and what I saw was the truth of what that moment was. Right before we had to leave for that, I had just had that conversation with Harry that morning and it was the next day that I talked to the institution [about how I didn’t want to be alive anymore],” Meghan said.

The photo seen above is the one that was shown by CBS during the interview special. 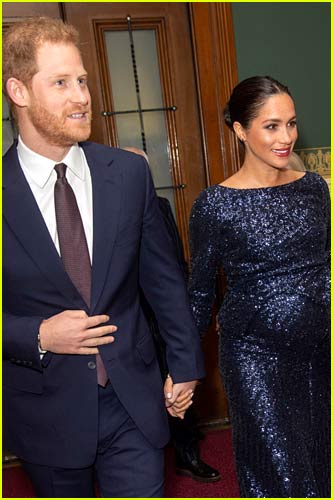 “We had to go to this event and I remember him saying, ‘I don’t think you can go.’ And I said, ‘I can’t be left alone,’” she said. When Oprah asked if it was because she was “afraid of what you might do to yourself,” Meghan tearfully nodded yes.

Meghan continued, “And we went and that picture, if you zoom in, what I see is how tightly his knuckles are gripped around mine. You can see the whites of our knuckles because we are smiling and doing our job, but we are both just trying to hold on. And every time that those lights went down in that royal box, I was just weeping. And he was gripping my hand and it was, ‘Okay, intermission is coming. Lights are about to come on.’ Everyone was looking at us and you just have to be on again. And that’s so important for people to remember, is that you have no idea what’s going on for someone behind closed doors. You have no idea. Even people that smile the biggest smiles or shine the brightest lights.”

Read our other post to see the 15 biggest bombshells from the interview special.

If you or someone you know is suicidal or in emotional distress, contact the National Suicide Prevention Lifeline at 1-800-273-TALK (8255).