The latest season of The Bachelor had a shocking conclusion and now Matt James is opening up to explain why it had to end the way it did.

Matt gave his final rose to Rachael Kirkconnell, but decided not to propose because he didn’t feel he was ready to take that step in their relationship.

After the season had wrapped, photos from Rachael‘s past surfaced and showed that she had attended an Antebellum party in 2018. At first, Matt was sticking by her side, but he couldn’t continue their relationship after Rachael expressed that she didn’t understand why people were offended by the images.

“It was as tough as you can imagine, and it’s heartbreaking,” Matt told After the Final Rose host Emmanuel Acho. “If you don’t understand why something like that is problematic in 2018, there’s a lot of me that you won’t understand. It’s as simple as that. … And I wasn’t okay, because it was in that moment and the conversation that I had that Rachael might not understand what it means to be Black in America.”

Matt said that he ended their relationship so Rachael can take time to grow as a person, but that he couldn’t be with her while she does that.

“As Rachael acknowledged in her apology, there’s a lot of work that needs to be done. I have to take a step back and allow her to put in that work,” he said. “And I’m looking forward to seeing her put in that work.”

Later on in the episode, Matt and Rachael came face-to-face for the first time since their breakup.

Click inside to find out what he told her… 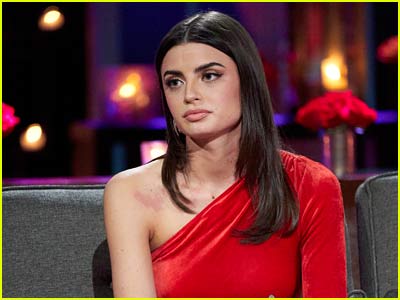 Matt had a lot to say to Rachael after they reunited.

“The most disappointing thing for me was having to explain to you why what I saw was problematic and why I was so upset,” he said. “And that’s why it was problematic, because when I’m in a relationship, it means that I’m committed to that person — and commitment for me when I’m dating someone is on track to get married. And so when I questioned our relationship, it was on the context of you not fully understanding my Blackness, and what it means to be a Black man in America. And what it would mean for our kids when I saw those things that were floating around the internet.”

Matt added that “it broke my heart, because this is the last conversation I thought we’d be having. I didn’t sign up to have this conversation. And I knew that I had to take a step back for you to put in that work that you outlined that you needed to do. And that’s something you gotta do on your own. And that’s why we can’t be in a relationship.”

Rachael said that she only went on The Bachelor to be with Matt and she “never experienced a love like this.” She added, “I don’t see anyone else out there for me. At this point I just don’t see how I can have these same feelings for someone else.”

Matt doesn’t want to see Rachael be “canceled,” but he doesn’t see a future with her.

“The feelings that I have for you don’t go away overnight,” he said. “And seeing you like this hurts. But then I ask myself, like, I don’t want to be emotionally responsible for those tears ’cause it’s like, the work and the reconciliation that needs to be done is work that I can’t do for you. And I know that you’re capable of doing it.”

Find out who will be the stars of the upcoming two seasons of The Bachelorette.