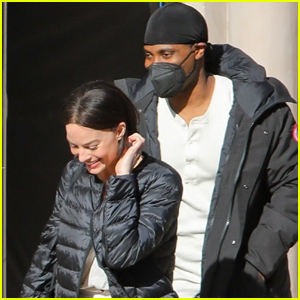 Margot Robbie and John David Washington are getting ready for another day of filming!

The actors shared a laugh as they arrived on set of their upcoming untitled David O. Russell-directed movie on Tuesday afternoon (March 16) in Los Angeles.

PHOTOS: Check out the latest pics of Margot Robbie

Margot sported a short, black wig and sweats while John David wore a mask and winter coat as they headed to their trailers.

Not much is known at all about the project, other than it being called an “Untitled David O. Russell Film.”

All we actually know is that it is “based on an original idea” and on top of Margot, Christian and John David, it will also feature a ton of other A-list stars!