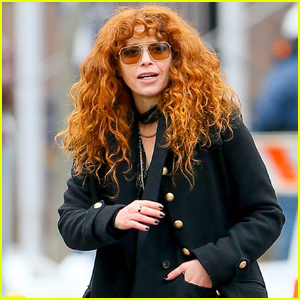 Natasha Lyonne is back at work!

Natasha paired her fiery red hair with an all black outfit as she filmed scenes for the new season of her Netflix series around the Big Apple.

Russian Doll, which premiered in 2019, stars Natasha as Nadia Vulvokov, a coder who is forced to re-live her 36th birthday on a nightmarish loop when she keeps dying and coming back to life.

Last week, it was announced that this Emmy winner has joined the cast of Russian Doll for season two!

Make sure you check out Natasha Lyonne‘s new movie The United States vs. Billie Holiday, which is available for streaming on Hulu now.