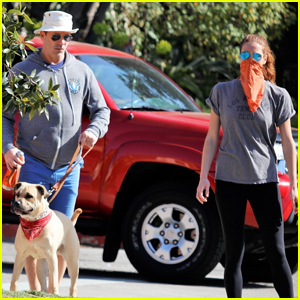 Jon Hamm holds on to his dog Splash‘s leash while out on a walk with girlfriend Anna Osceola on Saturday afternoon (March 20) in Los Angeles.

The 50-year-old Mad Men actor kept things casual in a beige hat, gray hoodie, and blue shorts while the 32-year-old actress sported a gray T-shirt and black leggings while staying safe with an orange bandana wrapped around her face.

During a recent interview, Jon opened up about how he celebrated his 50th birthday with Anna, which was back on March 10th.

Jon also recently chatted about some of the iconic roles on television that he could’ve had instead of Mad Men.

If you missed it, Jon Hamm will be teaming up with these two former co-stars for a new movie!