Rihanna is certainly taking her time before releasing new music – but she just provided a slight tease that has the Navy all riled up.

The 33-year-old Anti superstar celebrated her last studio album’s five full years on the Billboard 200 on Wednesday (March 24), making it the first album by a Black female artist to do so in chart history.

PHOTOS: Check out the latest pics of Rihanna

In the post, she wrote that she was “grateful to the most High for putting die hard supporters in my circle 🙏🏿 #Anti #WomensHistoryMonth 💪🏿 congrats to everyone that contributed to this era, thank you team.”

When a fan commented that she should “celebrate by releasing a song,” Rihanna replied “I think I should” with a “soon” emoji, adding “Just 1 tho lol.” 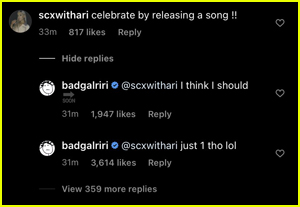 Here’s what Rihanna‘s label said about her long-awaited album recently.

It was also just revealed that one of her big hits almost went to someone else.