SPOILER ALERT – This post contains spoilers for the second episode of The Falcon and the Winter Soldier, so continue reading at your own risk!

Some epic things happened in the second episode of Marvel and Disney+’s new series The Falcon and the Winter Soldier and we’re recapping one of the big moments that happened.

The series premiere gave updates on where Sam Wilson/Falcon (Anthony Mackie) and Bucky Barnes/Winter Soldier (Sebastian Stan) have been following the events of Avengers: Endgame, but they didn’t share any scenes in that episode.

In the second episode, Sam and Bucky finally reunited and we learned what happened that led to them getting back together. 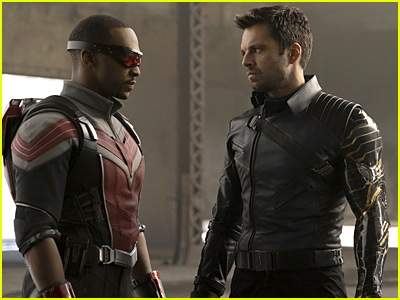 The second episode of the series begins with our first look at John Walker (Wyatt Russell) in his new role as Captain America and his press tour to win over the country’s affection. We learn that he’s a decorated soldier with incredible strength and now he’s in possession of the shield that used to belong to Steve Rogers.

Sam used to be the owner of the shield after Steve gifted it to him before his death, but he decided to donate it to the Smithsonian so it could be on display for Americans to see. The government had a different idea though and they decided to make a new Captain America.

Bucky is livid when he sees the news and he goes to visit Sam to confront him. The first thing he says to him is, “You shouldn’t have given him the shield.” Sam replies, “It’s good to see you too, Buck.”

Sam said he didn’t know it would happen and it “broke my heart” to see them march the new Captain America out there. Buck said, “This isn’t what Steve wanted… you had no right to give up the shield.”

Sam tells Bucky that he has to cut their reunion short because he has a mission to go on and… Bucky of course decided to tag along.