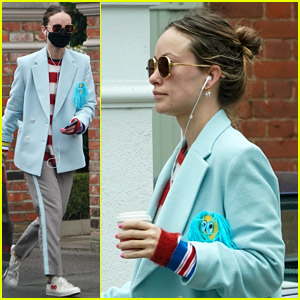 The 37-year-old actress completed her outfit with plaid pants and white sneakers, along with a black face mask.

PHOTOS: Check out the latest pics of Olivia Wilde

Olivia is seemingly in London right now while her ex-fiance Jason Sudeikis works on the second season of his Golden Globe-winning comedy series Ted Lasso. She and kids Otis and Daisy are in town with him while he films the show.

When Jason won a Critics Choice Award for the show a few weeks ago, he thanked Olivia in his speech and she also showed her support on Twitter.

Olivia also seemed to subtly support her rumored boyfriend Harry Styles when he won a Grammy!