Lakeith Stanfield is sharing his true thoughts on awards shows in an Instagram post that was quickly deleted after it went live.

The 29-year-old actor is nominated for Best Supporting Actor at the Oscars this year for his work in Judas and the Black Messiah.

Lakeith took to Instagram on Monday night (March 29) to react to a new report that the Oscars producers might let nominees appear at the show via Zoom after previously saying that everyone must show up in-person if they wish to participate. There was major backlash over that policy, so now that producers are trying to smooth things over with talent.

Lakeith shared a screencap of Deadline‘s article and captioned it, “No one cares lmao.” 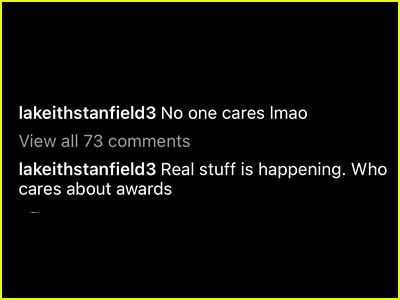 In the comments section of the post, Lakeith added, “Real stuff is happening. Who cares about awards.” The post has since been deleted, but a screencap is floating around on Twitter.