Did you know that Jeffrey Dean Morgan was in Star Trek?

It’s true, the 54-year-old actor opened up about the role and how it almost made him quit acting in a new interview with Hot Ones.

Jeffrey played a a Xindi-Reptilian character on Star Trek: Enterprise, which ran from 2001 to 2005 on the now defunct network, UPN.

For the role, Jeffrey had to go through a process of prosthetics, and it required him to be in a makeup chair for hours.

“It turns out I’m claustrophobic. I had a really hard time doing the makeup process, and I had straws in my nose,” Jeffrey recalled. 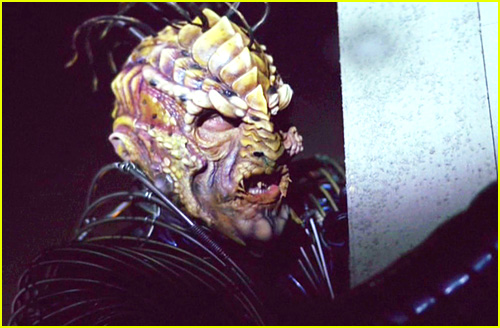 He added that the role made him contemplate what he was really doing with his life.

“I’ve never been on a set where I went home at night and just thought, ‘What am I doing? I’ve made the worst f***ing decision of my life. I don’t ever want to be an actor again.’ Like, I was sure that this was just wrong, and it almost made me quit. It was horrible.”

Previously, Jeffrey opened up about the role in 2012 with Entertainment Weekly, admitting he initially took the part to “pay my bills.”

“I knew I’d play some guy saying some stuff. Then I got a call saying I needed to go in for a prosthetic fitting,” he said. “I remember them dripping goop on my face, and I had straws sticking out of my nose. I couldn’t eat lunch. I was claustrophobic. I’d go home in tears.”

In another interview, Jeffrey opened up about The Walking Dead. Check it out…