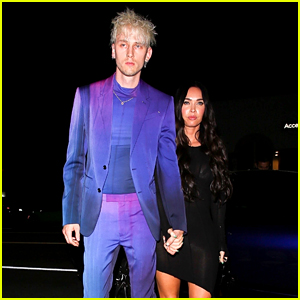 Machine Gun Kelly looks suave in his purple suit while holding hands with girlfriend Megan Fox during a night out in L.A.

The couple joined tons of celebs while stepping out for a star-studded party at The Nice Guy restaurant on Thursday night (April 8) in West Hollywood, Calif.

It’s not yet clear why all of the stars were gathered at the hotspot.

Megan and MGK were spotted on a double date with another famous couple just one night earlier.