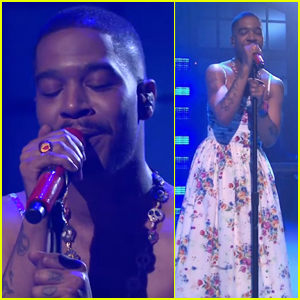 The 37-year-old rapper appeared on the NBC sketch comedy series as the musical guest on Saturday (April 10) in New York City.

For his first performance, Kid performed his hit song “Tequila Shots,” while wearing a green cardigan and a T-shirt that had a photo of the late SNL cast member Chris Farley on it.

Later in the evening, Kid put on a floral-print dress for a performance of his song “Sad People.” He ended the performance with a smile and a curtsy.

Fans were quick to point out on Twitter Kid was seemingly paying homage to the late Kurt Cobain with his outfit choices. Kurt famously wore the green cardigan and a floral-print dress during some of his performances back in the ’90s.

Kid‘s appearance on SNL comes several days after the anniversary of Kurt‘s death. He died by suicide back on April 5, 1994 at 27-years-old.

Earlier in the night, Kid appeared in an SNL sketch alongside one of his very famous friends!