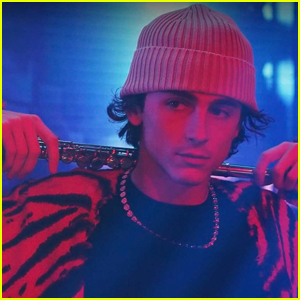 Timothee Chalamet is back on Saturday Night Live!

The 25-year-old Oscar-nominated actor made a surprise appearance on the NBC sketch comedy series on Saturday (April 10).

PHOTOS: Check out the latest pics of Timothee Chalamet

In the episode, which was hosted by Carey Mulligan, SNL cast members Pete Davidson and Chris Redd were joined by the episode’s musical guest Kid Cudi for a sketch, where they rap about “Weird Little Flutes.”

At one point, the three guys rap, “Timmy Chalamet loves a weird little flute” and Timothee popped up on screen in an orange-and-black sweater and started playing the flute.

If you didn’t know, Timothee, Pete, and Kid are actually really good friends! Back in January 2019, the three all celebrated Kid‘s birthday with a dinner at Nobu with Kanye West.

Find out who hilariously crashed Carey‘s monologue earlier in the show!