Monica Bellucci looks nothing like herself in these new set pics for La Befana!

The 56-year-old actress disguised her normally dark hair under a snow white long wig and black hat as she filmed scenes for the upcoming Italian film, La Befana Vien Di Notte 2 on the outskirts of Rome, Italy over the weekend.

Here’s a summary of the upcoming film La Befana vien di notte 2: It’s the 18th century, and Paola (Zoe Massenti), a delinquent street kid who’s always looking for trouble, unexpectedly finds herself stymying the plans of the terrible Baron De Michelis (Fabio De Luigi), a small, hunchbacked man who is never without his faithful yet ill-treated servant Marmotta (Herbert Ballerina) and who harbours a boundless thirst for power teamed with an immeasurable hatred of witches.

The sweet but incredibly powerful Dolores (Bellucci) – a good witch who dedicates her life to children – steps in and saves Paola from an already burning stake. Between magical learnings, fast-paced pursuits, incredible transformations and a whole lot of trouble, Paola discovers that destiny has something very special in store for her.

The plan is for the movie to debut around the Christmas holiday, according to Cineuropa.

Click inside to see Monica Bellucci’s full Dolores look for the movie! 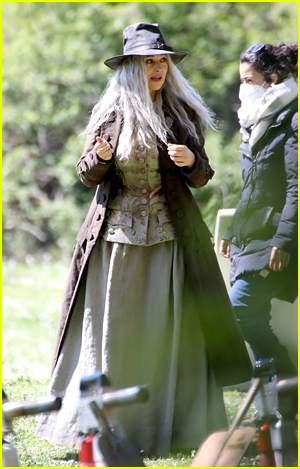 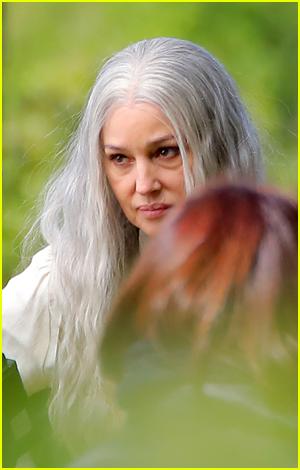 Monica was last seen out at the Christian Louboutin exhibition in Paris last year.