The Bachelor star Cassie Randolph is speaking out for the first time since her ex-boyfriend Colton Underwood came out as gay, though she’s not directly addressing the news.

We already learned this week that Colton did not speak to Cassie before coming out to the world, so it’s unclear if she found out when the rest of us did or if she heard through other people first.

Cassie‘s message to her fans clearly showed that she’s aware of what’s happening right now and that she needs some time to herself.

“Thank you everyone for the kind comments and messages. It means so much,” Cassie wrote on her Instagram Stories on Friday (April 16).

Cassie included a link to her YouTube channel and said, “And yes, some of you are asking about my YouTube for this week. I decided to take the week off, but will have one again next week!!” 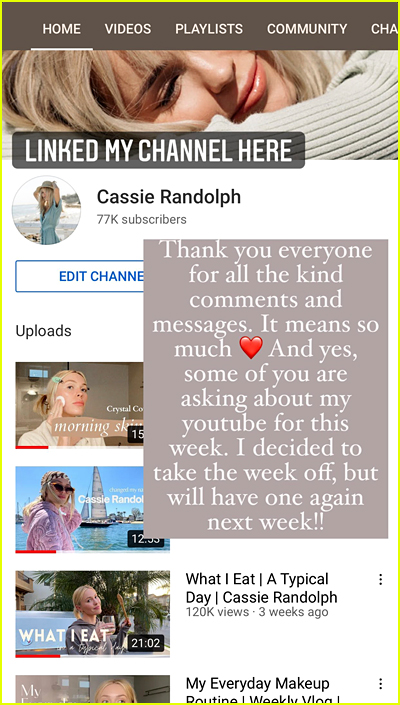 During his coming out interview on Good Morning America, Colton said that he was in love with Cassie and that made it more difficult to come to terms with his sexuality.

“I loved everything about her, and it’s hard for me to articulate exactly what my emotions were in going through that relationship with her because I obviously had an internal fight going on,” he said. “I would just say that I’m sorry from the bottom of my heart. I’m sorry for any pain and emotional stress I caused. I wish that it wouldn’t have happened the way that it did. I wish that I had been courageous enough to fix myself before I broke anybody else.”

Earlier this year, Colton explained why Cassie decided to break up with him.