Frankie Jonas has been known as the “Bonus Jonas” ever since he was a child while growing up as the younger brother of the Jonas Brothers and now he’s revealing his true thoughts on that nickname.

The 20-year-old is eight years younger than Nick, the brother who is closest to his age.

Frankie was just seven-years-old when he booked his first professional gig as the voice of Sōsuke in the animated movie Ponyo. He says he wasn’t able to enjoy the success of his career due to the nickname fans used for him. 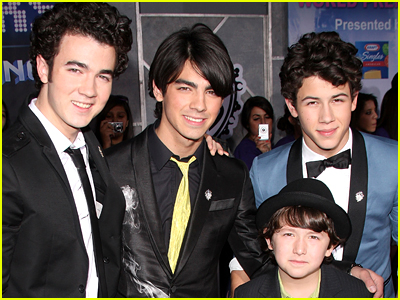 “I always hated that nickname,” Frankie said in a new interview with Bustle. “A lot of my problem with being in the public eye was that I was seen as this commodified vision of myself.”

Joe Jonas also spoke to the outlet about the nickname.

“I refused to call Frankie ‘Bonus Jonas’ after he opened up to me about how that was hurtful to him,” Joe said. “It completely makes sense, and we’ve had lengthy conversations and apologies behind closed doors that showcased my understanding and respect for his wishes. I think to feel like you are second, third, or fourth best from something is unfair; we are all equals.”

Frankie said that he was 12 when her first downloaded Twitter and searched his name.

“It was all pretty awful things for a 12-year-old to read,” he said. “A lot of it was like, ‘If you ever feel forgotten, remember this guy.’ Or, ‘Frankie Jonas is a talentless sack of sh*t.’”

He added, “It became a form of self-harm to look at these things. Then it became essentially an OCD, like a tic. I couldn’t stop. I checked it every day, and I had to, to feel OK in a way. It really became a serious issue for me. A lot of that perpetuated the idea that I was just this meme. I was this joke, and my entire identity to people was ‘adjacent,’ which really affected myself and the way that I thought about the world and the way I felt about myself.”

Frankie left Hollywood in 2015, but he now has found popularity on TikTok. In a recent video, he got candid about having suicidal thoughts before he got sober.