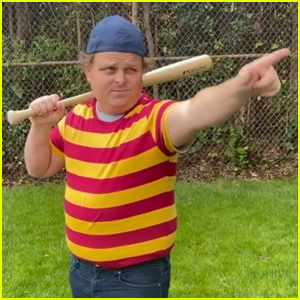 Patrick Renna is giving the people what they want!

The 42-year-old actor, who played Hamilton “Ham” Porter in the 1993 classic ’90s movie The Sandlot, created a TikTok account – and he’s already going viral for what he’s posting related to the movie.

In one video, Patrick shared a funny, yet simultaneously sad glimpse into what it’s like to be a child star recognized on the street.

Set to Justin Bieber‘s “Lonely,” he acts out an imaginary encounter between him a fan of The Sandlot, and being asked for a picture and to say his iconic catchphrase “You’re killin’ me, Smalls,” followed by him looking solemn afterward.

In another video, set to Simple Plan‘s “I’m Just a Kid,” he walks up in his identical outfit from the movie, nearly 30 years later.

Many stars and baseball teams commented on the posts, including MLB, which wrote: “The best catcher that ever lived,” to which he amusingly responded: “I’m avail for 2022 draft. Sleep on it.”

The videos have already generated millions of views, and he’s racked up 1.3 million followers in a matter of days.