SPOILER ALERT – This post contains spoilers for the season finale of Marvel’s The Falcon and the Winter Soldier, so beware of reading further.

One of the biggest mysteries on the Disney+ and Marvel series The Falcon and the Winter Soldier was the identity of the Power Broker.

This person has only been someone mentioned briefly throughout the previous five episodes and we never learned too much information. We know that the Power Broker runs the criminal sanctuary city-island Madripoor and this person hired a former Hydra scientist to recreate the Super Soldier Serum. The Flag Smashers, led by Karli Morgenthou (Erin Kellyman), stole the remaining serum samples and the Power Broker has been after them ever since.

We finally learned the identity of the Power Broker in the final episode of the season and the end credits scene focused on this character as well, laying some future plans for the Marvel Cinematic Universe.

Click inside to find out who the Power Broker is…

So, who is the Power Broker? 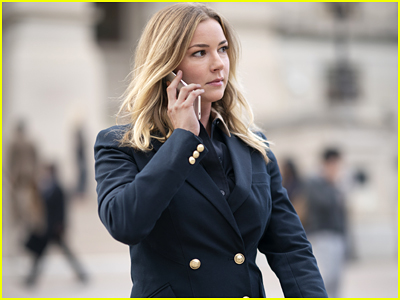 When we first saw her in episode three, appropriately titled “Power Broker,” she said that she had been living as a fugitive on Madripoor. Well, she was really running the whole place.

Karli is the one who reveals to the audience that Sharon is the Power Broker and Sharon ends up killing her, likely to make sure that Sam (Anthony Mackie) and Bucky (Sebastian Stan) don’t learn about her true identity. Sam had previously promised to Sharon in episode three that he would get her pardoned by the U.S. government, which happens in the end credits scene.

In the end credits, Sharon is granted a full pardon and she’s given her old position at the CIA. After she walks out of the building, she gets on the phone and tells someone, “Start lining up our buyers. Super soldiers might be off the menu, but we’re about to have full access to government secrets, prototype weapons, you name it. Should be something for everyone.” She’s clearly still a villain!!!

Another big moment at the end of the finale was when Wyatt Russell‘s character was officially given his new US Agent uniform by Julia Louis-Dreyfus‘ Contessa Valentina Allegra de Fontaine. Learn all about her character right here!

One of the most important parts of the finale was when Sam Wilson was reintroduced as the new Captain America with an amazing new suit, which used elements from his Falcon suit. He also was able to give Isaiah Bradley, an African-American veteran super soldier who was imprisoned and experimented on for 30 years, the proper tribute with a statue in the museum.

We have some good news for fans who wants a second season of The Falcon and the Winter Soldier.