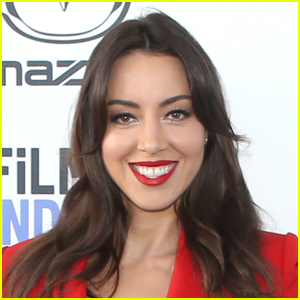 Aubrey Plaza is opening up about her new role behind the camera!

She spoke with People about directing an episode of the show and working with Jeff.

Check out what she said…

“It was great,” Aubrey said. “It was very hectic while we were making the show because we were quarantined and Jeff, he created the show. It was his idea.”

“Our house became this strange post-production facility and he’s downstairs on his Zooms or on his sessions and I’m upstairs editing, we’re just going back and forth,” she continued. “Yeah, it was very us. We were not baking sourdough bread, but we were sifting through hours of old movies and footage and re-cutting them together and just letting our minds go on a trip. So it was great.”

Aubrey added that while she’s worked with Jeff in the past in his movies Life After Beth (2014) and The Little Hours (2017), quarantine presented a unique opportunity because they were spending so much time together.

“I mean, ask any couple what it’s like being in the quarantine. It’s crazy,” Aubrey said. “Especially for us, I think, because I’m so used to not being home.”

She also revealed that she may be taking on another directorial project soon.

“I think it would be jinxing it to talk about it fully, but I have a movie that I’m trying to put together to direct very soon hopefully, and it’s something that I’ve been working on for years and years,” Aubrey said.