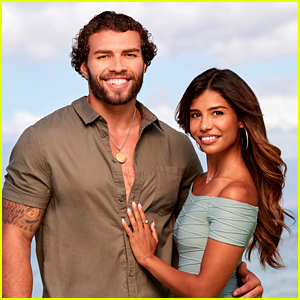 Temptation Island just wrapped up their season three and fans found out that one of the original couples were engaged!

At the end of the bonfire, Julian Allen dropped to one knee and asked Kristen Ramos to marry him in a romantic proposal.

The couple had been dating for 11 years before going on the show and during the reunion show, Julian and Kristen revealed they are in the middle of wedding planning and have already picked a date!

“Things have been great,” Julian told fans about their relationship, as they Zoomed into the reunion.

Click inside to see the moment Julian proposed to Kristen and all the fan reactions!

Can you even handle it? 🥺 These two are walking down the aisle! pic.twitter.com/nTJy4zcXI8

Check out all the tweets below!

Julian and Kristen really won this season of #TemptationIsland

JULIAN AND KRISTEN. THANK U FOR MAKING THIS SEASON OF #TemptationIsland WATCHABLE. thank u for being vunerable infront of thousands of people. thank yall for the tears! pic.twitter.com/XgF2dZmntZ

OMG!!!! I am so happy for Julian & Kristen ❤️❤️❤️❤️ #TemptationIsland

That was so romantic! Julian and Kristen are perfect together. True definition of love conquers all! @TemptationTV #temptationislandusa #TemptationIsland

That was a fantastically perfect proposal! Congratulations Kristen and Julian! #TemptationIsland pic.twitter.com/fd5y71sRx2

let someones son propose to me like Julian did to Kristen ….I’ll breakdown crying wholeheartedly 🥺#TemptationIsland