The new Netflix movie Things Heard & Seen is now streaming and it features an ending that will have some fans wanting more answers. Luckily, the directors of the film have spoken out to explain what happened!

Amanda Seyfried and James Norton star in the movie as a Manhattan couple who move to a historic hamlet in the Hudson Valley and come to discover that their marriage has a sinister darkness, one that rivals their new home’s history.

Catherine (Seyfried) and George (Norton) move to the small town with their daughter Franny so that he can take a job as an art history teacher at a private college. We eventually learn that people in the town are followers of an 18th-century Swedish theologian named Emanuel Swedenborg. One of Swedenborg’s followers, a real-life artist named George Inness, has a painting called “The Valley of the Shadow of Death” that becomes an important theme for the movie and plays a big role in the ending.

Click inside for more spoilers and an explanation of the ending…

Another important puzzle in the story that we learn is that the Clare family’s home is haunted by the wives who previously lived in the house and they are there to help Catherine. It’s implied that their husbands killed them because they disapproved of the women being followers of Swedenborg. 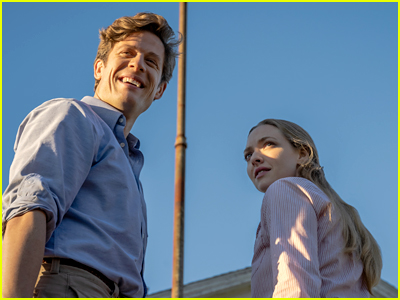 To sum up some more of the story, we find out that George has been lying to everyone in his life: he stole the identity of his late cousin, he forged a recommendation letter to get the teaching job, and he’s been cheating on his wife with a student. George’s boss finds out about the forged recommendation letter, so George kills him by drowning him in a lake. When he’s heading home after the drowning, his clothes are soaking wet and he’s seen by Catherine’s friend Justine, who reveals she knows about his affair. George realizes that she’s also going to know about the drowning because of his wet clothes, so he runs her off the road and causes her car to crash, which puts her in a coma.

George finally arrives home and Catherine sees him taking off his soaking wet clothes. She tries to run away with their daughter the next night, but George has already put a plan in place to kill her. He drugged her protein drink with a sedative and she falls unconscious. When she’s out cold in bed, he kills her with an axe.

George leaves Catherine’s body in the bed and the next day, he tells their babysitter that she is sick in bed and shouldn’t be disturbed. He goes to work so that he has an alibi and when he gets home, he reports the murder to the police. (For those that are paying attention, the scene at the beginning of the movie is connected to this moment)

The police definitely think that George killed his wife, but they don’t have the proof. Justine then wakes up from her coma and she leaves a message at George’s house to make sure he knows that she knows everything. George is clearly in a panic and he decides to flee on his cousin’s sailboat, The Lost Horizon. As he sails out to sea, a storm brews, the boat lights on fire, and the sky looks like the painting we saw earlier: “The Valley of the Shadow of Death.”

In the final moments of the movie, the dead wives say, “Because of you, we are joined in spirit. Because of you, our powers grow. From tiny drops, to an endless sea.” We also get a closer look at the photo of the original owners of the house and see that the wife is wearing the ring that Catherine found in the house, showing that it has been passed down between the wives of the house.

So, what did the directors say about the ending? 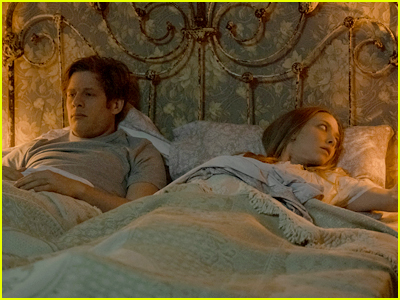 Writer and directors Shari Springer Berman and Robert Pulcini spoke to Decider about their interpretation of what happens to George in the end.

“Well, I hate to put a nail into people’s theories because I think there is an enigmatic element to the end of it. But I think what is interesting is that you have this painting that’s a transition to the afterlife,” Robert said. “George Inness who did this painting was this devotee of Swedenborg. This was his belief system. And he painted the moment where we transition into the afterlife—that’s what he wanted to express. One of the original husbands in the house decided that his wife was damned because she was a heretic in his eyes. She was exploring ideas that he didn’t approve of. So it’s like: Who gets to damn someone? Who is the damed in this story, and how does the universe correct? I think it’s actually a very topical notion as we’re seeing this kind of cultural revolt going on with, “toxic people” who have gotten away with things for so long getting their comeuppance. There’s something very satisfying about this shift of who’s damned actually in this story and who has the power to do that. I think there’s a spiritual power, you know, feminine power in this movie that really delivers the ending.”

Shari added, “I see [the final scene] as a metaphor for all the women who have been abused by husbands and fathers and preachers, and teachers and all the business people and producers and all that. Maybe not in this in their lifetime, but in the metaphysical sense of the eternity, of gaining some power. One of the things we made this movie for is watching it twice. I love movies that make me watch them twice to catch things. See how Justine gets out of her coma—there’s a line with the power of the women throughout.”