The first three episodes of The Handmaid’s Tale season four are streaming right now and some shocking things happen in the third episode of the season.

SPOILER ALERT – The rest of this post is going to contain some major spoilers for the show, so beware of reading any further.

When we last saw Elisabeth Moss‘ character June at the end of season three, she successfully was able to send over 80 children out of Gilead and safely get them to Canada. In the process of getting them on the plane, she was shot by a guard and was injured, but six other handmaids remained behind with her and carried her to safety.

At the start of season four, June and the other handmaids take refuge in a safe house, but their hiding spot is eventually discovered. June is captured while the other six handmaids are able to get to the next safe house.

Episode three finds June being tortured by Aunt Lydia and a commander of Gilead, who want her to tell them where the other handmaids are. The torture continues each time she refuses to give up their hiding spot. At one point, June is brought to the roof and two Marthas, Beth (Kristen Gutoskie) and Sienna (Sugenja Sri), are standing on the edge of the roof at gunpoint. They’re both pushed off the edge by the commander when June doesn’t speak. 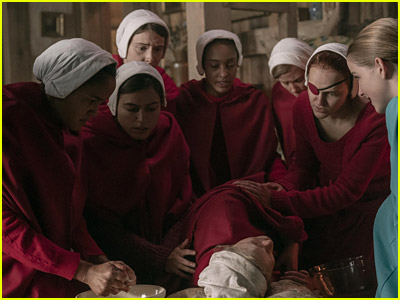 June eventually gives up the location when her daughter Hannah is brought to the detention center and her life is threatened. She and five of the other handmaids are put into a truck with Aunt Lydia to be transferred to a life at the colonies, where they will work all day and continue as handmaids.

The ending of the episode shocked viewers when they escape from the vehicle and make a run for it. Two of the handmaids are shot dead and two others, Alma (Nina Kiri) and Briana (Bahia Watson), are hit by a train and killed. The only two handmaids who survive and continue to run for their lives are June and Janine (Madeline Brewer).

So, what did series creator Bruce Miller have to say about all of this?

“All of those people are lovely and terrific actors, and hopefully will continue with flashbacks to be part of the family. Nobody is gone in Handmaid’s,” he told THR about the actresses whose characters were killed off. 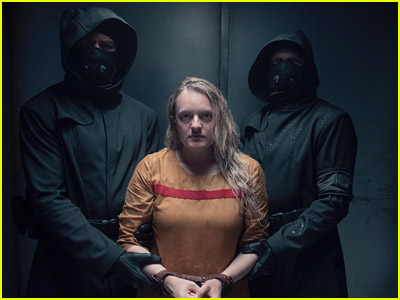 Bruce was also asked if the two Marthas who were killed off might also return in flashbacks. He said, “I would definitely envision that if possible. They are still great members of the family and playing those roles is hard. You have to do a lot with your face because you aren’t allowed to say very much. You say, ‘Yes, sir,’ when all you mean is, ‘F–k you.’ Those roles are very difficult and they really did a lot of work last year to make that story work. As sad and terrible as that was, I was glad to bring them back so centrally into June’s story because she had such a close connection with them. Because they’re so strong. Look at them — they don’t beg, they don’t break down. They are just tough as f–king nails. It’s so impressive.”

So, why were all of those deaths necessary?

“I look at it from the flip side. I’m thinking about what would happen. They’re in a terrible place; a place where nobody gets out. Nobody gets out. It’s hard to get out and this is what hard looks like. Hard is hard; it’s terrible,” Bruce said during the interview. “I wanted to make it realistic in terms of, what would the cost be to June? In the beginning of the season, she talks about how she wants to be a rebel and a hero. Those are nice words. But she is dealing with real human beings, making real decisions, and you have to drive that home for her. Sh-t happens to people because she makes these decisions. The reason why this is a season where lots of stuff happens is because she makes active decisions. She makes them happen, but there’s a huge cost.”

Read all about the chilling new character added for season four!